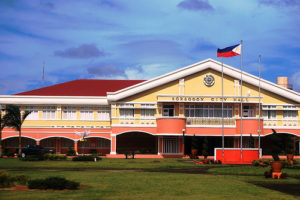 Sorsogon City anchors its vision on “A model city in climate change and disaster risk resiliency with a contented, empowered and values oriented society that pursues socio-economic development within the limit of nature thru genuine commitment to good governance.” Its intended  vision is further crystallized in its lofty mission which is “To ensure a transparent and responsive governance with genuine support and active participation of all sectors to improve the quality of life in Sorsogon City.”
Before the merger to form the City of Sorsogon, Bacon and Sorsogon enjoyed different economic classifications, with Sorsogon classified as first-class municipality and Bacon, fourth class. The merger has resulted in a political unit composed of 64 barangays falling into three districts: Bacon (with 28 barangays), Sorsogon West (with 22 barangays) and Sorsogon East (with 14 barangays).

Sorsogon City was created by virtue of Republic Act 8806, which was signed into law on August 16, 2000 and ratified during a plebiscite on December 16, 2000. RA 8806, also known as the Cityhood Law, called for the merger of the municipalities of Sorsogon and Bacon into a component city of the Province of Sorsogon. Sorsogon thus functioned as a full-pledged city on June 30, 2001, with the assumption into office of the first city officials. Part of its natural resources are geothermal energy  extracted in West and Bacon District and limestone which is available in Bato, Bacon District.

It is for many natural attractions that Sorsogon City is known. The Rompeolas or the Sorsogon City Bay Walk, with its walkway that serves as promenade, offers spectacular views of sunrise and sunset, as thus, Paroja Hill and Grotto, which overlooks Sorsogon Bay. Bucalbucalan, Alburo and Suhi Springs in the West District are ideal for cooling down, especially in the summer months. Bacon District boosts its beautiful beaches, limestone caves, lakes and marine sanctuary. Most notable of these are Paguriran Beach which is surrounded by dark basalt, Tolonggapo in Barangay Caricaran and the Bato Limestone Caves insides which were found prehistoric artifacts. To attract more visitors and to highlight the City’s tourism potentials, Sosogon Festival is held annually to celebrate the founding anniversary of the city.

Although relatively young, the city boasts of a colorful history that goes back to the pre-Hispanic times, when Moro pirates frequently trespass its territorial waters. With the coming of the Spanish colonizers in the 1600s, Bacon was organized into a visita of the town of Casiguran, one of the oldest settlements in Luzon. The municipality of Sorsogon, whose original Site was in Sitio Pocdol in Capuy, was in turn, a visita of Bacon. As its population increased, however, Sorsogon was declared an independent, full-fledged parish in 1628. The Pueblo Civil de Bacon was established in 1754, with Juan Elias as its first gobernadorcillo. Sorsogon on the other hand, became an independent political unit in 1864. From their organization as visitas and eventually as independent pueblos, both Bacon and Sorsogon remained under the territorial jurisdiction of the province of Albay. On October 17, 1894, the Spanish authorities organized a geographical unit independent from Albay, with the town of Sorsogon as its seat of government. The new province adopted the name of the town and has since been known as the Province of Sorsogon.

Sorsogon is part of the geographical chain linking Luzon to the rest of the Philippines. It is a transshipment corridor and serves as the seat of the Province of Sorsogon. Mountain range on the northwest, sloping uplands on the central part, plain areas south western and central north and southeast portion, and marshlands on the southeast deltas.

Agriculture and fisheries sector is still the driving force of its economy. Main agricultural products include rice, coconut, abaca, pili nuts, root crops and vegetables. Having abundant raw materials needed by the different industries, coconut oil and by-products, choco-pili candy, seaweed processing and abaca by-products are the business that can be put-up in the city.

Sorsogon City, as the capital town of the province of Sorsogon, is a hub of trade and commerce. Its strategic location has given rise to a busy commercial district composed of local businesses and franchises of national and regional business chain. Business is concentrated in the downtown area near the public market and major commercial establishments primarily geared towards retail and wholesale and the Bacon District is the secondary business district of the City.

An Economic Zone has been identified in the northeast part of the City.  It covers the barangays of Buhatan, Cabid-an and Bibincahan. Within the Economic Zone and along the diversion road, a 50-hectare agro-industrial zone is being proposed and targeted. The area can accommodate the food terminal, warehouses, storage facilities and light industries.

The construction of Sorsogon Shopping Center and the Integrated City Terminal  opened its door for new investors. The most important resource is its people. Fifty-six percent (56%) of the total population belongs to the labor force.  Sorsoganon’s are known for being industrious, law abiding and responsible people.

The Provincial Capitol and Sorsogon National High School main building are just some of the historic turn-of-the century edifices in the city.